This chapter discusses how to configure, use, and administer a Stardog Cluster for uninterrupted operations.

Stardog Cluster is a collection of Stardog Server instances running on one or more virtual or physical machines behind a load balancer that, from the client’s perspective, behave like a single Stardog Server instance. “Client” here means the client of Stardog APIs. To fully achieve this effect requires DNS (i.e., with SRV records) and proxy configuration that’s left as an exercise for the user.

Our detailed blog post discusses a variety of factors that you should consider when deploying Stardog Cluster as well as some adjustments you should make depending on your workload. 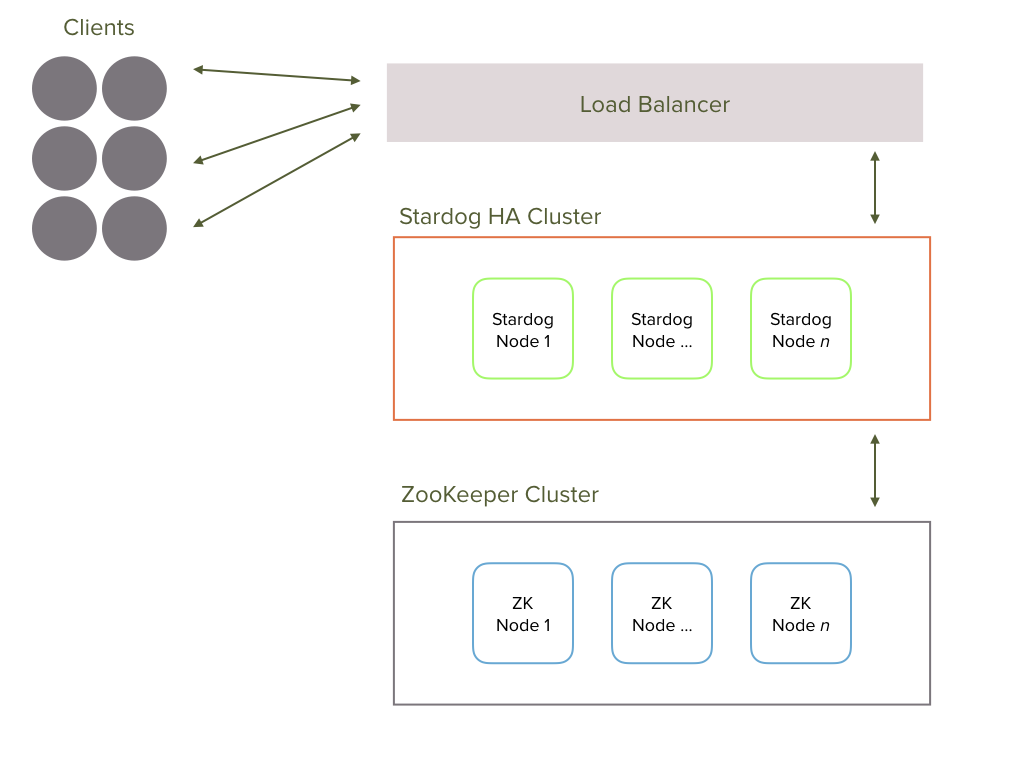 Stardog Cluster depends on Apache ZooKeeper. High Availability requires at least three Stardog and three ZooKeeper nodes in the Cluster. ZooKeeper works best, with respect to fault resiliency, with an ensemble size that is an odd-number greater than or equal to three: 3, 5, 7, etc. See ZK Admin for more details.

Stardog Cluster uses a strong consistency model, meaning that all nodes in the cluster have all of the data. Therefore, when a client writes to Stardog it must be written to all cluster members before the cluster responds to the client. There is no sharding or eventual consistency in Stardog Cluster.

With respect to performance, larger Stardog clusters perform better than smaller ones for reads, while larger cluster sizes perform worse for writes. It is the responsibility of the administrator to find the right balance.

ZooKeeper maintains the list of cluster members, therefore, if any node loses its connection to ZooKeeper, it will have to rejoin the cluster syncing any necessary data in order to remain consistent with the other nodes in the cluster. ZooKeeper also manages cluster-wide locks for write transactions, administrator operations, and joining nodes.

A cluster is composed of a set of Stardog servers and a ZooKeeper ensemble running together. One of the Stardog servers is the Coordinator and the others are Participants. The Coordinator orchestrates transactions and maintains consistency by expelling any nodes that fail an operation. An expelled node must sync with a current member to rejoin the cluster.

In case the Coordinator fails at any point, a new Coordinator will be elected out of the remaining available Participants. Stardog Cluster supports both read (e.g., querying) and write (e.g., adding data) requests. All read and write requests can be handled by any of the nodes in the cluster. When a client commits a transaction (containing a list of write requests), it will be acknowledged by the receiving node only after every non-failing peer node has committed the transaction. If a peer node fails during the process of committing a transaction, it will be expelled from the cluster by the Coordinator and put in a temporary failed state. If the Coordinator fails during the process, the transaction will be aborted. At that point the client can retry the transaction and it should succeed with the new cluster coordinator.

Since failed nodes are not used for any subsequent read or write requests, if a commit is acknowledged, then Stardog Cluster guarantees that the data has been accordingly modified at every available node in the cluster.

While this approach is less performant with respect to write operations than eventual consistency used by other distributed databases, typically those databases offer a much less expressive data model than Stardog, which makes an eventually consistency model more appropriate for those systems (and less so for Stardog). But since Stardog’s data model is not only richly expressive but rests in part on provably correct semantics, we think that a strong consistency model is worth the cost.

In order to maintain strong consistency a joining node must join under a lock that blocks both write transacations and administrator operations. If it is able to join without syncing data then it will join immediately. However, if it needs to sync, the node will release the lock, sync the missing data, and then try again. By default a node tries to join 3 times without holding a lock during data sync before it performs the entire join process under lock (including syncing data).